25.05.2020 by Biomedis
The testing was carried out in order to determine how the BIOSKY photonic crystal changes the water quality that is its redox potential.

The research was carried out by the immunologist-allergist doctor, homeopathist, head of the ‘Homeopathic medicine’ medical center, Russia, Rostov-on-Don.

There were tested 3 samples of water of different brands.

Measuring of redox potential (RP) were made with the RP meter.

All three samples were measured with the RP meter. 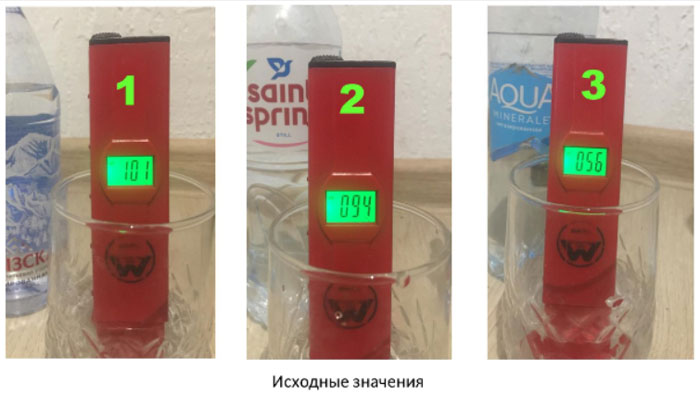 Then the BIOSKY crystals were placed under the tested samples. After 40 minutes the control measurement of RP was made.

The water RP value after 40 minutes of the BIOSKY treatment: 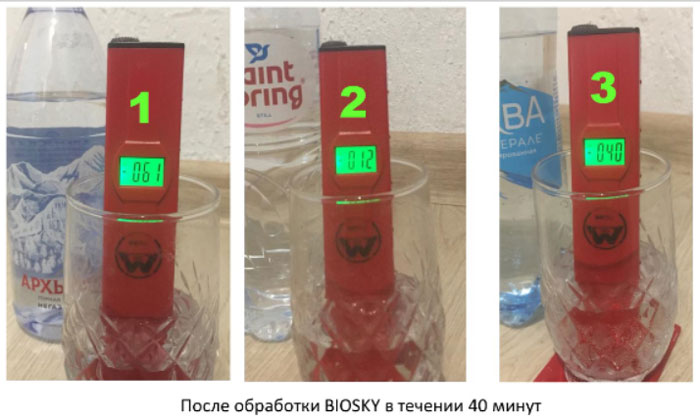 The water remained on crystals for another two hours. The water RP continues to decrease.

The water RP value after more than 2 hours of BIOSKY treatment: 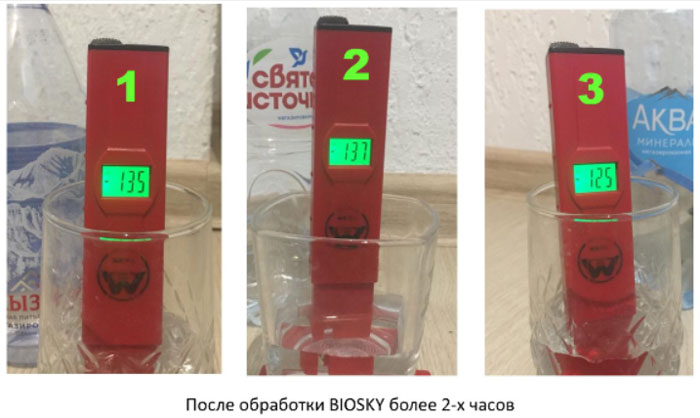 Also it was noted that a glass of water which was placed at 30 cm from the crystals with the tested samples but not taking part in the research also had a negative RP.

Conclusion: the BIOSKY photonic crystal significantly improves the water quality decreasing its redox potential and despite external electromagnetic noises, keeps it in ‘live’ range for a human.

Water, treated with BIOSKY due to the negative RP values:

Every medium containing liquid has RP. So, the human body has RP, and its value ranges from -100mV to -200mV.

RP of ordinary drinking water is always significantly higher than zero: RP of tap and bottled water ranges from +80 to +300 mV.

Due to the difference in the RP of the human body and such drinking water, there is a constant process of transformation from plus to minus inside, the cells constantly give their energy to such a conversion, and as a result they wear out, age, die.

The bigger the difference in the RP of a person and water, the more cellular energy is required to match them, the more we wear out, age prematurely.
To reduce or slow down such cellular destruction of the human body, it is necessary that the water that enters the body has the properties of an internal environment, that is, the redox potential of the water must be with negative values.

When a person drinks water with negative RP values, the water is like an antioxidant for the body, it does not need to be converted, it has a large number of free electrons in its composition
Water with the negative RP is a safe restorer of the tissues cells, antioxidant and a source of energy for the organism, it is a ‘live water’.