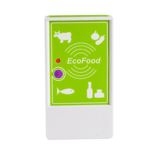 The device is used for decontamination of food and water.
ECOFOOD disinfects food, water and household items. The effect of the device is unfavorable for pathogenic organisms. This prevents infection in the human body, provides prevention of many diseases and supports a safe environment.

Every day the human body encounters pathogens - poorly processed vegetables and fruits, infected fish and meat, kitchens, bathrooms and toilets, door mats, couches for pets. Chemical disinfectants and detergents are generally used for disinfection. The use of ECOFOOD for disinfection is the most environmentally friendly way to influence pathogenic microorganisms.

ECOFOOD is effectively used for: Reviews
The device Ecofood includes an electromagnetic field emitter of optic diapason. The field which is generated by the device has essential biological activity. This impact is negative for pathogen organisms. If it is needed to decontaminate food and water, you should add informative matrix of 'Chlorhexidine', and use appropriate amplitude modulation of optic radiation source. Radiation power and parameters of an amplitude modulation of radiation are set, controlled and regulated by the built-in program using a microprocessor. When the device is operating, some of the energy of electromagnetic radiation is converted into a biofield, similar to that created by the functional systems of the human or animal body.

According to the experimentally obtained results, the electromagnetic field generated by the device has a sufficiently strong biological activity. Herewith, the present biological effect can be both favorable for the irradiated organism, and unfavorable for living tissues. This depends on the combinations of modulation characteristics and the form of radiation established in the program. The sign (±) of the biological effect and the selection of the parameters, intensity and type of radiation incorporated in the program was carried out empirically (yet the theory of such processes does not exist) using biosensors or biodetectors (cell populations and cultures) or by subjective perception of a human-operator, (for example psychics and biolocation). The biogenic radiation effect of the device can vary quite strongly in the dynamic range, from biostimulating to biopathogenic, depending on the type of pulse modulation of the radiation source. If the radiation of the device passes through a substance, the radiation stream receives an additional specific information modulation containing information about this substance that is carried along with the radiation field on the irradiated organism, food or water. As a result, the body receives an additional and very important biologically active effect. When the device is used to disinfect food and water, "Chlorhexidine" or information matrix of the inactivated strain of the pathogenic organism is inserted into the device and the corresponding program of information modulation of the source of optical radiation is switched on. The ECOFUD device is manufactured with the established matrix "Chlorhexidine".

The radiation generator operates at a frequency with a wavelength of 525 nanometers, a radiation power of 500 milliwatts, an active radius of 50 cm to the object of irradiation, two modulation frequencies of radiation: 12.5 hertz and 3.5 kilohertz. The device is small in size 58x105x19 mm, powered by 3 volts from two AAA batteries.

The studies of the impact of the ECOFOOD device

Laboratory testings of the ECOFOOD device
Attention! Do not direct ECOFOOD with its back side to the person. ECOFOOD with an information matrix of chlorhexidine is intended only to affect water, food and household items.
﻿